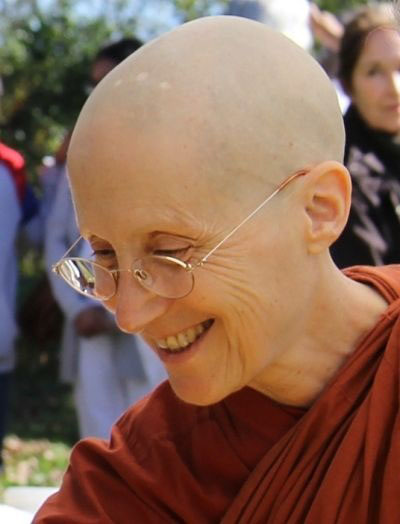 Ayya Medhanandi Bhikkhuni, is the founder and guiding teacher of Sati Saraniya Hermitage, a forest monastery for women in the Theravada tradition.

The daughter of Eastern European refugees who emigrated to Montreal after World War II, she began a spiritual quest in childhood that led her to India, Burma, England, New Zealand, Malaysia, Taiwan, and finally, back to Canada.

In 1988, at the Yangon Mahasi retreat centre in Burma, Ayya requested ordination as a bhikkhuni from her teacher, the Venerable Sayadaw U Pandita. This was not yet possible for Theravada Buddhist women. Instead, Sayadaw granted her ordination as a 10 precept novice nun on condition that she take her vows for life. Thus began Ayya’s monastic training in the Burmese tradition.

When the borders were closed to foreigners by a military coup, in 1990 Sayadaw blessed her to join the Ajahn Chah Thai Forest Sangha at Amaravati, UK. After ten years in their siladhara community, Ayya felt called to more seclusion and solitude in New Zealand and SE Asia.

After nearly 20 years as a novice alms-mendicant nun, in 2007, Ayya fulfilled her long-held wish for full ordination – she took her bhikkhuni vows at Ling Quan Chan Monastery in Keelung, Taiwan. In 2008, on invitation from the Ottawa Buddhist Society and Toronto Theravada Buddhist Community, Ayya returned to her native Canada to establish Sati Saraniya Hermitage.

To hear talks by this teacher, visit:
https://dharmaseed.org/teacher/391/