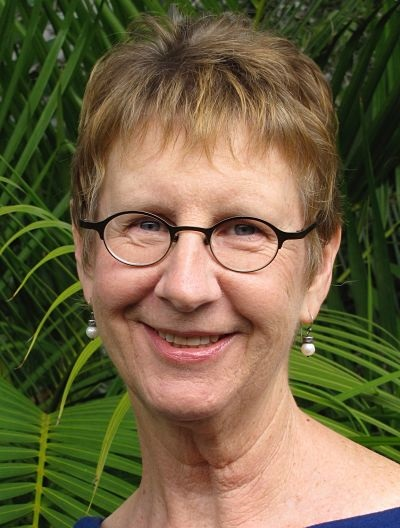 Kathy Schwerin began her Buddhist practice in 1987 after a life-changing trip to Asia. Suffering from depression, her only real ambition was to be an old lady who could sit in a rocking chair on a porch overlooking a pond and say, “phew, I made it.” After meeting a Western meditator in Nepal whose aspiration was to be a wise old man, she realized she had not thought about what kind of old woman she would be. Wisdom became her north star, helping her navigate in a steady direction as she also practiced ethical behavior and learned to calm the mind.

Kathy’s first teacher was Ruth Denison who taught her the importance of bringing awareness to the body. She practiced with Thich Nhat Hanh in the early nineties, doing three long retreats in France at Plum Village as well as shorter retreats in the US. His emphasis on daily mindfulness, using reminders such as stop signs, church bells, and going through doorways consciously, was especially helpful as she has rarely had an ongoing daily sitting practice.

She and her good friend Christy Tews began a weekly sitting group that grew into Northern Nevada’s Dharma Zephyr Insight Meditation Community, which now includes nine sitting groups. They completed the second Spirit Rock Community Dharma Leader training in 2003. Over the years many teachers in the vipassana tradition have taught at Dharma Zephyr, including residential retreats with John Travis, Kamala Masters, Donald Rothberg, Santikaro and Shaila Catherine. Kathy has done multiple retreats with these teachers and others at IMS, Spirit Rock, Southwest Sangha, Vipassana Metta and Cloud Mountain.

In 2018 Kathy co-taught her first residential retreat, assisting Amita Schmidt, whom she will assist at Cloud Mountain in 2019. She is a semi-retired psychotherapist who blogs at AMindfulBreath.com.