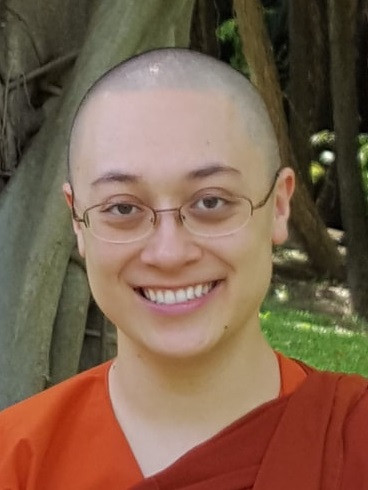 Ayya Cittananda has spent over ten years on the Buddhist path, after being inspired in 2005 by a college philosophy class to spend time practicing at monasteries.  After completing a Bachelor’s of Science in Nursing and working at a hospital as a registered nurse in Texas, she lived as a monastic at a small Pure Land/Chan monastery in Florida for a year before moving to California.  She spent two years living and working in Redwood Valley, made daily visits to Abhayagiri Buddhist Monastery, and sat several long retreats at various monasteries and meditation centers.  She left Redwood Valley in 2013 in search of a place to ordain as a Theravadan nun, spending six months at the Ajahn Chah lineage monasteries in England and Scotland.  She also spent seven months at Aloka Vihara in Placerville, helping the nuns settle into their new home and serving the 2015 Winter Retreat there.  Ayya Cittananda took Anagarika precepts at Karuna Buddhist Vihara in March of 2015, Samaneri ordination in April of 2016, and Bhikkhuni ordination in May of 2018 at Buddhi Vihara in Santa Clara, California.