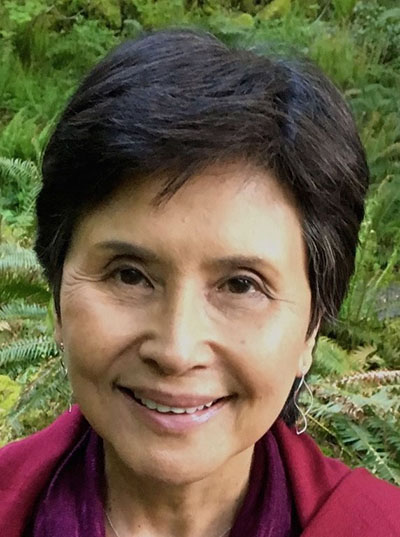 Kamala began practicing meditation in the mid-seventies attending retreats in the Theravada tradition. In 1977 she met Anagarika Munindra, who became her first teacher. He trained under Mahasi Sayadaw (1904-1982), a highly regarded Burmese monk commonly recognized as the grandfather of the Theravada tradition that began in the West. Munindra had a down-to-earth teaching style and conveyed the Dhamma in a very compassionate way.

During one of Kamala’s first retreats, Munindra asked if she practiced sitting meditation every day. She replied that it didn’t seem possible while raising three small children, so he taught her the importance of practicing mindfulness in everyday life. This became an essential practice in addition to continuing to participate in intensive retreats when possible.

After some years of organizing and attending retreats with Munindra, he suggested that Kamala practice with Sayadaw U Pandita, who was also trained by Mahasi Sayadaw. In 1985, after a year of saving and making the preparations needed to care for her family, she was able to attend a one-month retreat with U Pandita in Australia. His guidance was precise and filled with clarity and compassion. He helped her understand the refinements of awareness through her own experience. From then on he remained a major teacher for her, along with Munindra.

There were years when it wasn’t possible to do any long-term intensive practice because of needing to support the children and send them to college. But when the children became young adults, she was able to fulfill an aspiration of temporarily ordaining as a nun in 2001 and 2003 in Burma under the preceptorship of Sayadaw U Pandita.

In 2005 she began practicing cittanupassana, contemplation of mind, with Sayadaw U Tejaniya. U Tejaniya’s teacher was Shwe Oo Min, a contemporary of U Pandita in the Mahasi lineage. She integrates this teaching with what she has learned from her other respected teachers.

In the early nineties Kamala began teaching with Joseph Goldstein, Sharon Salzberg, Jack Kornfield, and later with Steve Armstrong and other teachers. She teaches in the United States and abroad, and is a Guiding Teacher and member of the Board of Directors at the Insight Meditation Society.

Kamala continues her awareness practice in daily life and strives for extended periods of self-retreat each year. Her path is not finished! She also enjoys spending time with her family, which now includes five grandchildren, and being a spiritual friend to dedicated yogis on the path to liberation. She is grateful for the opportunity to serve and to grow in the Dhamma.

To hear talks by this teacher, visit:
http://dharmaseed.org/teacher/99/