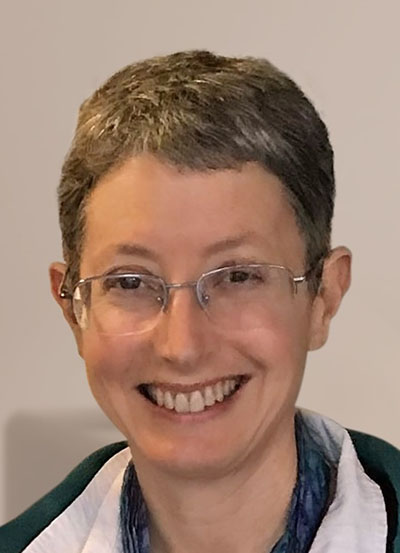 Amma Thanasanti is a California native, born into a Jewish family with her roots from Poland and Russia. In 1979, at the age of seventeen, Amma was dedicated to a spiritual life, Theravada insight and loving kindness practices. She envisioned living her life as a nun.

Amma graduated with a BA in Biology from University of California at Santa Cruz in 1985. This course of study was a deliberate challenge to her spiritual practice. She thought, if the Dhamma was true as she experienced it, and truth wasn’t personal, she wanted to see how Dhamma showed up in science. Studying in order to be able to get a job was never part of her initial motivation. It was only after she graduated University that she realized that she was qualified to work as an analytical chemist - which she did for 2 years.

In 1987, after nine years of daily insight meditation practice, many ten-day retreats and one three month retrea, she went on a pilgrimage to India, Nepal and Thailand. She went to study and practice with the meditation masters who had inspired her from the beginning -- Ajahn Chah, Ajahn Buddhadasa, His Holiness Dalai Lama and Dipa Ma. The combined impact of meeting Dipa Ma and a close encounter with a bear re-energized her aspiration to awaken.

Visiting Ajahn Chah’s forest monastery dedicated to western born monks in Thailand was a turning point. She was inspired by the power and simplicity of monastic practice within a Forest monastery and her experience of Ajahn Chah’s luminous mind. She was unsettled by the patriarchal cultural norms in the Thai Forest tradition. Holding the dichotomy of these tensions while reflecting on the transformative power of meditation allowed her to contextualize the cultural norms. Great faith and joy arose and as a result, she decided to request to be ordained.

In 1989 she travelled to England and joined the Ajahn Chah lineage and the community of nuns that lived at both Amaravati and Chithurst Buddhist Monasteries. In 1991 she received Siladhara ordination with Ajahn Sumedho as her preceptor. In 1996, she began teaching intensive retreats internationally.

She took Bodhisattva vows with His Holiness Dalai Lama in the year 2000 enroute to spending extensive time in retreat in the remote bush of Australia.

After 30 years of the nuns order in England, the patriarchal norms took on an alarming dominance. In response, Amma left formal affiliations with the Ajahn Chah monasteries and returned to the USA where she lived in Colorado as a solitary alms mendicant.

While in Colorado Amma created and co-facilitated a three year program that combined deep Dharma study and practice with personal character development, leadership training, and community building. When different developmental needs alongside the gradual and imminent path of awakening were part of the curriculum, it supported individuals tracking and advocating for their personal needs and learning to be allies for each other, while at the same time cultivating their spiritual aspiration.

In 2010, 19 years after becoming a nun, Amma was part of the first all-Theravada dual platform Bhikkhuni ordination in this country with Ayya Tathaaloka as her preceptor.

Amma’s teaching style is imbued with rigor, fearlessness, compassion and a sense of humor. She empowers her students to find their own way. Her teachings include psychology, the impact of trauma and supports for its release, cultivating spiritual friendship, letting nature illuminate our inter-connection and reveal the awakened mind, valuing learning models above didactic teaching styles and navigating our manifold responsibilities while staying connected to our rich and varied, often vulnerable human experience. While she teaches multiplicity -- how our individual experience, relationships, social structures and physical world are all part of our experience of wholeness -- she continually returns to the profound but simple practices in early Buddhist teachings and the ever-present awakened mind.

After years of thoughtful consideration about living as a monastic, when Amma also included her own longing for wholeness, she realized that being a monastic no longer served her aspiration to awaken. After 26 years as a Buddhist Nun, she returned to civilian life.

Amma is currently living in Piedmont, California, looking to create another training that combines deep Dharma study and practice, character development, leadership training and community building as a way to grow and respond to the complexities of the world around us.

To hear talks by this teacher, visit:
https://dharmaseed.org/teacher/12/