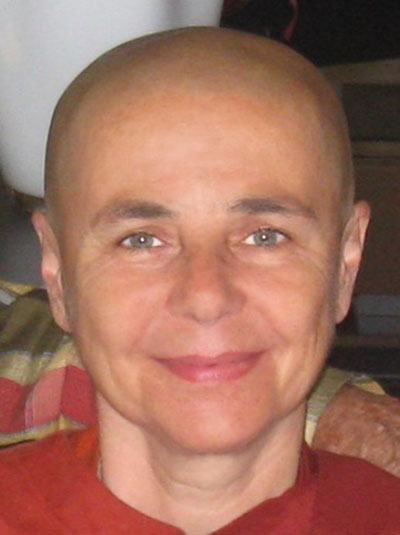 Venerable Santacitta Bhikkhuni began practicing meditation in 1988 in the forests of South Thailand. Her first teacher was Ajahn Buddhadasa, who sparked her interest in Buddhist monastic life. Ajahn Buddhadasa's style was an innovative combination of living an ancient tradition while opening to contemporary issues, his writings on activism provided the link between the teachings of the Buddha and engaged Buddhist practice today.

In 1992 Ayya Santacitta joined Amaravati Buddhist Monastery near London, in the lineage of Ajahn Chah, another well-known teacher in the Thai Forest Tradition. Ajahn Sumedho, the founding abbot of Amaravati, and the nuns of the Siladhara Order became her teachers for 17 years. The main emphasis of the training at Amaravati is community practice, as well as adapting Buddhist monastic training for Westerners.

Another important influence was Shechen Rabjam Rinpoche, a Dzogchen teacher in the lineage of Dilgo Khyentse Rinpoche, whom Ayya Santacitta first met in 2002. The splendor of the Tibetan tradition has brought a new energetic quality to her practice, after having cultivated a foundation in the Theravada tradition.

In 2008, a new door started to open when, on invitation of the Saranaloka Foundation, Aloka Vihara was established in San Francisco. After meeting Western bhikkhunis (fully ordained Buddhist nuns) for the first time in California, Ayya Santacitta decided to leave the Ajahn Chah lineage in order to take full ordination in 2011.

Lately the books and teachings on Early Buddhism by Analayo Bhikkhu have been a source of clarification for Ayya Santacitta's practice, supporting a return to the simplicity of the essence of the Buddha's original instructions.

In 2014 Aloka Vihara relocated for about eight years to the forest of the Sierra Foothills near Sacramento, California. Since early 2023 Ayya Santacitta has been developing the Aloka Earth Room ~ a contemporary temple-space synthesizing Dharma, ecology and art.

To hear talks by this teacher, visit:
http://dharmaseed.org/teacher/278/