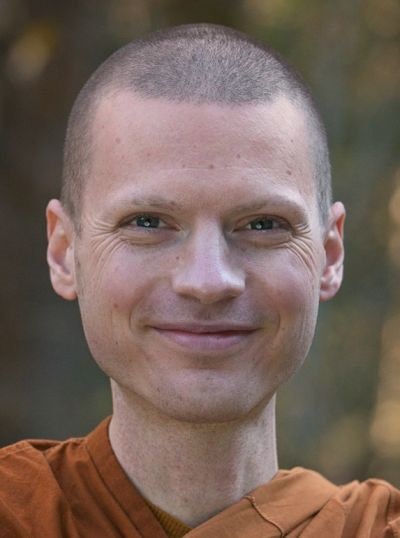 After finishing college in 2012, Ven. Nisabho (addressed as “Ajahn Nisabho” in the Thai custom) left his native Washington to go forth as a Buddhist monk in Thailand. He received full ordination the following spring under Ajahn Anan, a senior disciple of renowned meditation master, Ajahn Chah, and spent the following years training in forest monasteries throughout Thailand, Australia, and the US. While staying with some of the lineage’s most respected teachers, he grew to believe the Thai Forest Tradition’s balance of communal life with solitary forest dwelling, careful adherence to the monastic precepts, and focus on meditation represented a faithful embodiment of the original Buddhist path. Moreover, his time with contemporary masters such as Ajahn Anan, Ajahn Pasanno, and Ajahn Jayasaro, convinced him that such a path could yield great fruit in the heart even amidst the complexities of modern life. Ajahn Nisabho currently lives on the outskirts of Seattle, where he moved in 2021 in order to help found Clear Mountain monastery.

Ajahn Nisabho’s articulation of Dhamma draws deeply from the early Pali texts and Thai Forest masters. While modern instructors frequently describe samādhi, or concentration, as a narrow sense of focus, Ajahn Nisabho emphasizes a broad unification of mind based in the somatic sense, subtle body, and breath. Such a perspective, grounded in the teachings of contemporary masters such Ajahn Ṭhānissaro and Ajahn Sucitto, uses the sixteen steps of the Ānāpānasati Sutta as a basis and works with, rather than against, the modern thinking mind. Additionally, Ajahn Nisabho raises up other practices, such as the Sound of Silence, loving-kindness, and insight meditation.